The Cesky Terrier was the first Czech national breed to be recognised by the FCI (the International Canine Federation).

The Cesky Terrier was recognised by the FCI in 1963, and the first Cesky Terrier arrived in the UK in 1989. This was Erb Lovu zdar, bred by the breed's founder, František Horák.
With over 200 different breeds recognised in the UK - and many more world-wide - you would think that there would be a dog to suit everyone! But what if you can’t find exactly what you want? The answer for Czech geneticist František Horák was quite simple. In 1950 he took the first steps towards creating a new breed, the Cesky (Czech) Terrier. Starting with a Sealyham Terrier dog called Buganier Urquelle and a Scottie bitch named Scotch Rose, he took only six generations to breed the four bitches that are behind every Cesky Terrier in the world today.

Horák had several aims. He wanted a terrier that was suited to hunting in the forests of Bohemia, but it must also be an attractive show dog and a loving family companion. He opted for a silky coat that was groomed by clipping, rather than hand-stripping, as this makes for much easier show preparation. He liked the darker colour of the Scottie, but preferred the drop ears of the Sealyham. Before long, his new creation was attracting attention from breeders all round the world. 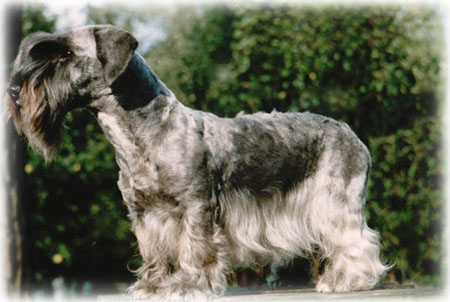 Chrpa del Monte. The present Breed Standard was based on this bitch