The story of František Horák’s vision - to create a terrier suitable for hunting in the forests of Bohemia - is well-known, but what of the man himself?

He lived a long and eventful life which encompassed significant political and historical changes. He was born in a country known as the Czech Lands, a part of the autocratic and all-powerful Habsburg Empire, but which in 1918 became a constituent of the newly created Czechoslovakia. He lived through the economic optimism of the 1920s and the political crises of the ‘30s, emerging into the hardship and repression of the Communist takeover in 1948. By the time he died in 1997, Czechoslovakia was a distant memory, and he was a citizen of the Czech Republic, a democratic nation that was soon to become a member of the European Union.
The young František was born on June 13th, 1909 in his maternal grandmother’s farmhouse in the tiny village of Chotovice on the shores of Lake Zehunsky, east of Prague. Grandmother felt that thirteen was an unlucky number, so his date of birth was actually registered as June 12th! Soon however he had moved to his parent’s home, a much more imposing place. Horák senior was Steward to the wealthy Kinsky family, one of the foremost dynasties of Central Europe, who had one of their main estates on the edge of the small town of Clumec nad Cidlinou. The family lived in an imposing house which still stands across the courtyard from the main chateau, and the young boy had an idyllic childhood with the freedom of acres of parkland in which to play. 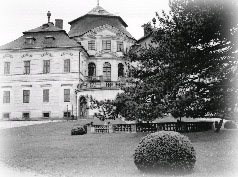 The Kinsky family were popular with their tenants, and their Steward’s bright young son became a family favourite. With houses in Prague and in Italy, the family were cosmopolitan and sophisticated, and František was fascinated by the tales of their fashionable life in the 1920s. He was allowed free run of the chateau and when Count Kinsky found him in the library, trying to learn German and French from the books in there, he orded that the youngster should be given every encouragement. It could also be said that the family sparked his adult passion for dog-breeding. Octavian Kinsky became famous for developing his own breed of horses, elgant but strong steeplechasers. Meanwhile the second daughter of the household had the first black Miniature Schnauzers in the country, and also kept Giant Schnauzers. These dogs were allowed to run free in the parkland, and were known for miles around as they were not inclined to welcome strangers. On one occasion two gentlemen, intent on visiting the Count, called at the local police station and asked that the dogs be arrested and held in custody so that they could call at the chateau unmolested.

Horák went to school in Chlumec, and at around the age of six or seven he acquired his first dog - a Cocker Spaniel. In a move which was to be repeated many times throughout his life, the young lad just assumed that there would be no opposition to his new pet. His mother was furious when she saw the dog and an argument followed. Father took his son’s part, and was consequently chased around the chateau by his wife, wielding her broom - quite an affront to the dignity of such an important member of the staff! A few years later Horák acquired his second dog, and first terrier, a Smooth Fox Terrier.

After school, Horák took a business course at a college in Hradec Kralove and for a time he worked for a wood company. When he was twenty, Horák’s father died, and the family moved to a small hunting lodge on the estate. Three years later, at an athletics meeting, he was to meet Jaroslava Conová, the seventeen-year-old sister of a friend. They married in 1934, by which time Horák was working as an accountant for an engineering company in Plzen, whilst his new wife had qualified as a teacher and was working at the school in Chlumec. By this time, the first Scottie (Amis z Kozovy Hory) had joined their household. Horák had no car, and public transport was difficult, so he travelled between the two houses on a bicycle (a distance of nearly 150 kilometres!), with the Scottie riding in the basket on the front. By 1936 the Horáks had moved to Plzen, had their first child, and acquired a second Scottie bitch. In 1938, Horák bred his first litter, and his Lovu zdar affix was becoming successful within the dog show world. 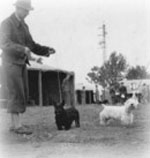 By now the various factors which were to combine to lead to the creation of the Cesky Terrier were in place. Horák would take his Scotties out hunting in the woods outside Plzen, where he was often joined by his friend Mr Cervenka, a breeder of Sealyham Terriers. But political events were to take a hand, and there was no chance to put his ideas into practice for another ten years. Meanwhile, the family’s second child was born in 1939, and then in 1940 they moved to Klánovice, on the outskirts of Prague, along with six or seven Scotties. Living nearby was a lady who had a Sealyham Terrier, bred by her daughter in England before the war. This lady had the opportunity to go and live with her daughter, and Horák bought the Sealyham from her, so that he could get to know the character of the breed at first hand. Meanwhile he was still workng in an engineering factory, as the firm’s accountant.

In 1948, all was to change. The young family, like so many others in Czechoslovakia at that time, found their life turned upside down when the Communist Party took over the country. For a time Horák was out of work. Not a man to sit at home idling away the days, he started liasing with the Kennel Club, recording pedigrees and registrations, and at last his plans for a new breed could be given serious consideration.

One positive aspect of the Communist regime was that it was renowned for finding a job for every citizen, even though that job was not necessarily the one for which the person had any training or aptitude, but in 1952, for Horák, the perfect position fell into his lap, and he became a technician at the Physiology Institute of the Ceskoslovenska Academie Ved (Czechoslovak Academy of Science), in the department of Professor Servit, working on research into Epilepsy. Horák stayed there until he was seventy-six years old.

At least with a regular job, there was some money coming into the house, but with a growing family to support (two more children had been born), and an increasing number of dogs, as the Cesky Terrier started to develop, life was never easy, and Horák could not be relied upon spend his salary wisely. On one occasion, in 1955 or ‘56, Mrs Horák wanted to buy a goat which would provide milk for the household. Her husband went out to find one, and came home several hours later by taxi, accompanied not by a goat, but by a miniature horse which he had bought from a circus! From then on there were always one or two of these horses cropping the grass in the garden (the last one died in 2002), but Mrs Horák did eventually get a black pygmy goat to provide milk for the puppies. On another occasion, he spent a whole month’s salary on a Borzoi.

At one time Horák was an ardent hunter, and in 1958 he, along with a couple of friends, killed 12 foxes in one day. He brought home an orphan cub, and from then on he never went hunting again, instead keeping a fox and a badger as pets, along with an owl, which lived in an old grandfather clock in the living room.

One of the terriers, called Babicka (it means ‘grandmother’), was something of an escape artist, and poor Mrs Horák was always having to search round the village for her. On one particular occasion she was shouting “Babicka, if you don’t come back straight away, I’m going to smack you, and lock you in the shed and never let you out!” Such was the climate of suspicion and intolerance at that time, that some neighbours reported her to the local commisariat, and she had to present herself to the authorities to explain that Babicka was actually a dog, and that she wasn’t indulging in granny-bashing!

Horák was well-respected by his fellow terrier breeders. Every Sunday all his dog friends would gather at the little house in Klánovice. 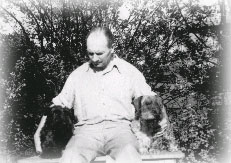 He became an adviser to many dog clubs, and mentor to many new terrier judges. Amongst the many enthusiastic young breeders who enjoyed those sunny afternoons talking nonstop about dogs, was Olivia Smid, now world-famous for her Skye Terrier kennel. Another who took part in these gatherings was Dora Geblerová, judge at the Czech Cesky Terrier Club Show in 2003, celebrating the fortieth anniversary of the Cesky Terrier. Together all these enthusiasts would discuss breeding, genetics and judging and evaluate puppies.

As the Cesky Terrier became more established (it was recognised by the FCI in 1963), Horák found himself being contacted by would-be owners from all over the world. Even this could cause him problems. On one occasion the StB (Secret Police) knocked at his door demanding to know what subversion he was involved in, as he was always receiving suspicious letters from abroad. He replied simply “You know why they are writing to me, because you have already opened their letters and read them!”

Eventually, in 1989, the Velvet Revolution removed Communist control from the country. The opening of borders gave new opportunities for lovers of the Cesky Terrier, and until his death on January 6th 1996, Horák enthusiastically welcomed his many friends from all round the world who made a pilgrimage to meet this remarkable man. In 1992, he suggested that a special gathering ‘The Days of the Cesky Terrier’ should be held, and this has now become an annual event, attracting Cesky Terrier lovers from the United States, Canada and Australia, as well as virtually every European country. 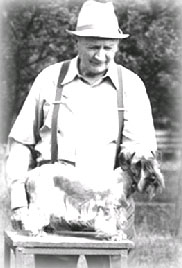 The Cesky Terrier was the first Czech national breed to be recognised by the FCI, and in character typifies the man who created it. Sometimes mischievous, and with a great sense of humour; always hard-working and above all a loyal and devoted friend. For this very special dog we can only say “Thankyou Mr Horák!”.