František Horák's explanation of how he came to create the Cesky Terrier
In 1932 I obtained my first Scottish Terrier from a breeder called Sklenar in Krocehavy. I had seen this breed featured on the front cover of a magazine (‘Pes’ or ‘Dog’) in 1928. I read everything I could find about the breed, especially its suitability for hunting. This first dog was, from puppyhood, very aggressive, especially to people, but he showed a great interest in working.

By 1934 I was working in Plzen, and so I had the opportunity of hunting with my dog in the old Thurn-Taxis hunting grounds at Vysoka near Dobrany. There were many foxes and badgers, and also Red deer, hares and other game. The dog was, in particular, very good underground, and so I decided that this was the breed for me. As a member of the dog club in Plzen I made the acquaintance of another Scottish Terrier breeder, Mr Cervenka. Besides Scotties, he also owned Sealyham Terriers. During one meeting with him, as we watched the two breeds, we discussed their relative working abilities. On the basis of my experience working my Scotties, I said that ‘something’ between both these breeds could lead to a more successful result.

In 1936, I bought a Scottie bitch from the same breeder, Mr Sklenar, and in 1938 produced my first litter of Scottish Terriers under the affix ‘Lovu zdar’. In 1940 I moved to Klanovice, near Prague, with my family, and although the war years were, of course, very difficult, I had already acquired a Sealyham bitch (Joyfull Juta) from a well-known breeder, Mrs Wurm. Over the next few years I bought a couple more Sealyham bitches. They were very good workers, with excellent noses, and (completely opposite to the Scotties) very obedient. By this time I was thinking more and more about trying to fulfil my idea from 1934 - to form a new breed from the Scottie and the Sealyham!

Therefore, in 1949 I mated my Scottish terrier bitch, Donka Lovu zdar to the Sealyham Terrier dog Buganier Urquelle. The result was a litter of three puppies, but only one dog survived. He was given the name Adam Lovu zdar, and the number 1 in my personal record. This dog was brindle, like his mother. He had half-dropped ears, bigger than those of the Scottish Terrier. As he grew older I was able to observe his hunting qualities - unfortunately, he was shot dead by a careless hunter in 1951 during a hare-hunt in Klanovice.

I reported my breeding experiment to the Czech Terrier Club, and asked that the breed be called the Cesky Terrier if it were a success.

In 1950, I repeated my experiment. Just as in the first litter, I crossed a Scottish Terrier bitch (Scotch Rose) with the Sealyham Terrier dog, Buganier Urquelle.

This time there were six puppies in the litter, but only one (Balda Lovu zdar, #2) had the dropped ears that I wanted. Again, he was brindle. Balda became the Foundation sire of the breed. First I mated his litter sister, Baba Lovu zdar, to Adam (her half-brother), but none of the puppies were suitable for breeding; then I mated her to Balda (brother x sister) but likewise, these puppies were not what I wanted. Then I put Balda to his dam, Scotch Rose. This was successful, because this time there were two puppies with well-dropped ears - a dog, Dareba Lovu zdar, and a bitch, Diana Lovu zdar. I gave Dareba (who was brindle) to a hunter, but he died shortly after, so was never used for breeding. 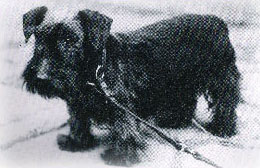 His sister, Diana, however, became the Foundation Dam of the breed. At first she was black, but later became dark grey, and she had especially well-dropped ears. She had a satisfactory resemblance to the type of Cesky Terrier that I had in mind.

As far as the coat was concerned, I decided at that early stage, that it would be clipped, as hand-stripping (the correct method of grooming the two constituent breeds) required much skill and was very time-consuming.

Because my second successful cross had involved a mother-son mating, I chose, for the next one, the bitch Diana Lovu zdar and a Sealyham Terrier dog. Buganier Urquelle had died, so therefore I used his son, Jasans Amorous Artilleryman, bred by my friend Mr Mann in Prague. In this litter there were two dogs and one bitch, given the names Fantom, Furiant and Fenka, of course with the suffix Lovu zdar. Fantom was brindle, just like his sister Fenka, but the dog Furiant was black with tan markings, and they all had white marks on the chest and legs. Furiant was powerfully built and had a large white collar, making him unsuitable for breeding. I crossed Fantom with his sister Fenka. Only one puppy survived, a bitch called Halali, who proved to be a pillar of the breed.

Jitka Horáková with Fantom and Chytry


Fantom was mated to his daughter, Halali, and in this litter there was one brown coloured dog, with a liver nose and tan markings (Chytry). Unfortunately he was sterile. Afterwards I crossed Fantom with his mother, Diana, and again there was a brown puppy, this time a bitch (Iris) who was all brown.


Due to lack of space, and not realising how difficult it would be to reproduce this colour, I gave the bitch away to a friend, who unfortunately lost her. (These two remained the only brown Cesky Terriers until 1993 when the male Vladyka del Monte was born.) The gene for the brown colour must come from the Sealyham Terrier, as it is not known in the Scottish Terrier, and must have been carried by Fantom, Diana and Halali.

In 1959 I exhibited Fantom, Chytry and Javor (Fantom x Halali) at the International Dog Show in Liberec ‘not for competition’. The visitors, especially those from other countries, were very interested in this new breed, and soon after the show, a start was made, with the help of Mr Dipl. Ing. Najman, in entering these terriers in the Czechoslovakian Register under the name Cesky (Czech) Terrier’. Number 1 in this register went to the bitch Chrabra Lovu zdar and another thirteen Cesky Terriers were initially registered. In 1963 the Cesky Terrier was officially recognised by the FCI as an independent breed. The development of the breed was finished.

There were essentially two reasons which induced me to create this breed:
1) to create an ideal compromise between two go-to-ground breeds - the Scottish Terrier and the Sealyham Terrier, producing a fully pigmented breed (like a Scottie) with a practical drop ear (like a Sealyham), small, agile, and with a relatively simple grooming style, achieved by clipping rather than hand-stripping.
2) to investigate the possibility of producing a completely different breed from a minimum number of individuals. (In the origin of the Cesky Terrier only two dogs and one bitch were used).

Whether my endeavour was successful I leave to the breeders of today to decide!