The Cesky Terrier is an all-purpose hunting terrier.

The breed was conceived with three purposes in mind: first and foremost was to be a useful worker, retrieving small game, going to ground and most importantly, tracking the blood scent of deer and wild boar and giving voice when these are found. 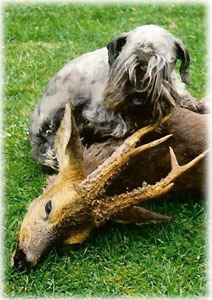 The working method and working character of the Cesky Terrier differs in so many points from that of other terriers. The recognition of these differences is essential for good training. The CT matures late compared with other terriers. This does not, however, mean that training should begin at a later stage. Obedience can be continually practised from 4-5 months of age. At this stage the pup should be listening to its name, walking on the lead and retrieving with pleasure. The whole upbringing of the dog must be playful and, especially, without punishment. At the age of six months the trainer can teach the following commands: heel, sit, stay and down. Retrieving must be learnt very conscientiously by the dog. This breed is very sensitive and needs a loving and kind teacher, but at the same time one that is consistently firm. At this stage it is satisfactory if the dog is interested in the earth, barks and shows fierceness and staying power against wild game.

The (Czech Hunting Club) test for keenness and earthwork is done when the dog is 2 or preferably 3 years old. The earth work of the CT can be compared with that of a Dachshund. Only a few dogs actually manage to catch the game. When the CT succeeds in chasing the wild game into the third pit and indefatigably tries to seize it, this will win the 2nd level prize. A Dachshund would win the 1st level prize for the same achievement.

During the puppy period, tracking should be practised with the dog. While walking the dog, the owner can hide and the pup will try and find its boss. Encouragement can be given to tracking down game by not calling the dog back if it picks up a trail. Because the CT is a short-legged animal, the chances of catching the game is very small, so it will soon abandon the trail and return. While searching for a wounded animal, the CT will prove its excellent qualities in blood tracking. Because of its first class nose, good obedience, its thoughtful way of working and its interest in the quarry during tracking, the CT is number one out of all terriers in the Czech working tests. 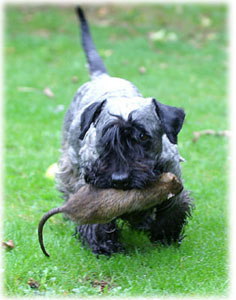 In training for blood tracking, what really counts is the staying power on the trail while on the lead. As soon as we notice it has picked up the trail, it is then let loose. During work, the CT always keeps its eye on its boss who can follow the dog. Should the trail lead through forbidding terrain or thick undergrowth, then the hunter can walk round the area, slowly returning via a path in the direction of the dog.

Meanwhile the dog pursues the trail of the hunted game untiringly, even though there may be more trails present. Should the dog lose its boss, then it will continually return to him and should then pick up the trail again without command. Should the wounded/shot game be traced alive, then most dogs will kill small deer and will bay at wild boar. With the boar, the CT shows great care, but does still remain constantly attentive. Only at an age of 3 years does the CT possess the necessary maturity and harmony for this kind of work. Its character is also formed by then. The CT lives longer than many other breeds and matures late. These qualities are the reason for not being over hasty with the rearing and training of the Cesky Terrier.