All Cesky Terriers descend from four basic families, named after the four daughters of the bitch Chrabra Lovu zdar (Fantom Lovu zdar x Halali Lovu zdar). Lovka and Lapka were sired by Javor Lovu zdar whilst Ulrika and Urana were sired by Mrak Lovu zdar.
Mr Horák chose the bitch Lovka as the most important for the future of the breed because she was a very correct bitch, of good size, with an excellent coat and correctly carried tail, whilst her sister Lapka was smaller and had a very gay tail. She was kept merely as a companion for Lovka. However, as so often happens, Lovka kept her lovliness to herself and it was Lapka who produced the best puppies in the next generation.

However from Lapka descends, through Dolly Vivat, the sub-line 1B, which carries many serious faults. It is difficult to know why this should be, but it is thought that the bitch Bellis Solor, who was mated to Trysk Lz, was also covered by a crossbred male when she produced the ‘D’ Vivat litter. These puppies were atypical in many features - ears, body shape, coat, colour.

The family Ulrika was undoubtedly of pure breeding, and it was this line that was to become most important, thanks mainly to the male Cedro Bohemicus. A daughter of Ulrika, Aida ze Zbytkova dvora, mated to Abel Lovu zdar, gave Abel z Klce. Another daughter, Gina Lovu zdar was the dam of the bitch Bessy Bohemicus. Bessy, mated to her half-brother Abel, produced Cedro Bohemicus.

Abel z Klce was a difficult dog to mate, whereas his son Cedro was a keen and fertile stud. Cedro rescued the breed and it is thanks to him that the Cesky Terrier is here today. 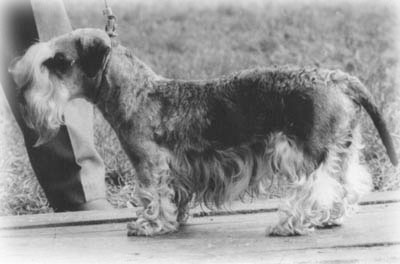 In the late 1970s the Cesky Terrier was in a parlous state in Czechoslovakia. The very existence of the breed was threatened. The bitches were old and infertile and there were no active stud dogs. Horák and Hana Petrusová began to search for any bitches that could be used for breeding. All of these bitches were mated to Cedro who had been bought by Tomaš and Hana Petrusová from a pet owner.

The family Urana has, unfortunately, only poor quality descendants, classified in Line 1B, and not regarded as important in modern breeding.

The existence of the breed had been threatened not only by the decrease in fertile breeding stock, but also by the newly introduced disease - parvovirus - for which, at that time, vaccines were not available in Czechoslovakia. Together, Cedro Bohemicus and the availability of vaccines from abroad could solve those problems. Much more difficult to overcome was the problem of the authorities and their attitude to breeding.

In communist Czechoslovakia the breeding of all terriers was regulated by the Czech Hunting Association (CMS). Every breeder had to be a member, and had then to pass tests of proficiency in shooting and fieldcraft. For this reason a lot of Cesky Terrier owners did not breed. No breeder could own more than five brood bitches, and in every breed there was a ‘stop time’ when no bitch could be mated.
If a bitch came in season only once a year, and her heat coincided with this ‘stop time’ she could never be bred from. This applied to all breeds, but the Cesky Terrier was further affected by the officials of the CMS, who appointed an adviser for each breed whose task was to approve all matings before they took place. In spite of being the ‘author’ of the breed, Horák was not the adviser for the Cesky Terrier, and his requests to eliminate the first suspect dogs of Line 1B from the breeding programme were ignored - these dogs actually being preferred due to their higher fertility. Many of Horák’s planned matings were rejected, and the officials reminded him very strongly that he was only an ordinary club member and their decisions applied as much to him as to any other member.

However, in 1984 and ‘85 Horák was permitted to make an outcross. The Sealyham terrier bitch Andra z Rastamoru was mated on both occasions to Vanek Lovu zdar (Cedro x Abba) and from these two litters the male, Cent, and the bitches Belinda, Besy, Bora, Cena and Clona were later used for breeding. 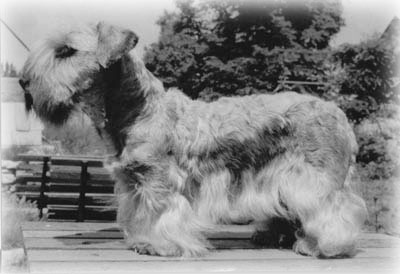 
The Sealyham regeneration brought an immediate increase in fertility and overall health of the puppies. On the down side light eyes, heavy ears, ‘winter’ noses, high set tails and greater size were introduced to the breed. However, in the long-term this regeneration (given the nomenclature Line 1A) has been beneficial to the Cesky Terrier.