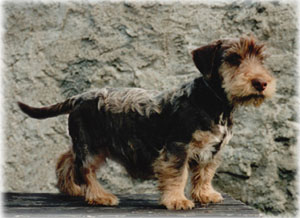 Puppies are either born uniformly black or brown (brown b is recessive to black B) or bi-coloured black (brown) with tan markings.


The uniform colour (given the genetic nomenclature As) is dominant to the bi-colour (denoted by at). Occasionally individuals are born that show a saddle (asa) pattern

The Cesky Terrier also has a gene for lightening the pigment (G) that has been inherited from the Sealyham Terrier. If the recessive (g) is present instead, the pigmentation stays dark. In bi-coloured terriers, the additional presence of the gene cch (also inherited from the Sealyham) will cause the lightening of the tan markings, which may then appear visually almost white.

Because the breed was developed from a combination between the fully-pigmented Scottish Terrier (SS) and the mainly white Sealyham (swsw) the Breed Standard allows for up to 20% white markings, although the breeder's aim should be for minimal white.

What does all this mean to the breeder? 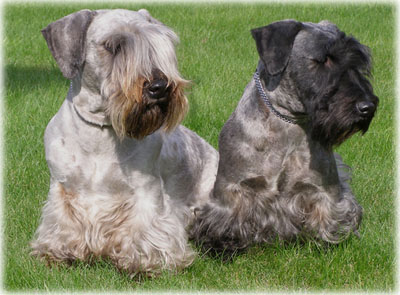 Thus, in order to retain the full range of colour pattern within the breed it is essential to utilise both uniformly-coloured individuals and bi-colours, as well as the full range of shading from dark through to light.


Continually mating together very dark Cesky Terriers will eventually produce dogs that are visually black, rather than dark grey, whilst crossing together light-coloured dogs, without occasional recourse to a darker individual will lead to the breeding of Cesky Terriers that are optically white.

As our knowledge of colour genetics develops, it is possible to determine the exact genetic make up of the breed through DNA testing. For a detailed explanation of the colour patterns found in the Cesky Terrier Click Here

All brown Cesky Terriers are descended from the male Vladyka del Monte, born in 1993. As the brown marker is recessive, both parents must be B/b in order to produce brown puppies, so inevitably, in a breed that is already highly inbred, brown dogs will have an even higher Co-efficient of Inbreeding; thus great care must be taken by those attempting to fix the brown colour in their breeding when considering matings.